â Gold rose 30% in the 12 months after Obama inauguration

â ‘Strong dollar policy’ to end as U.S.Â has $120 trillion plus debt

Gold performs well in inauguration years (see table) and has seen average gains of 15% in inaugural years since the 1970s.

Given the degree of uncertainty, divisiveness and conflict that Trump’s election has already created â both in America and internationally, it seems almost certain that the many risks as President Trump takes power will lead to higher gold prices. 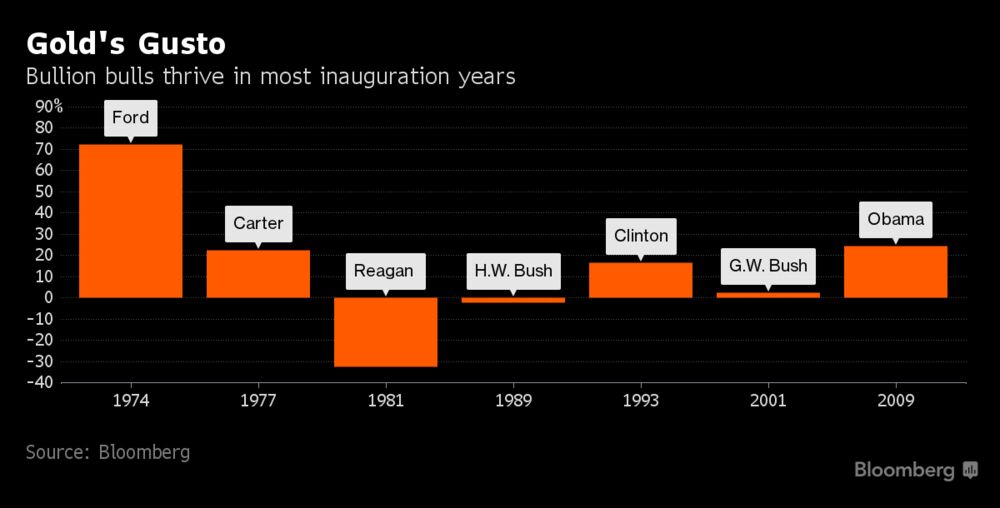 Besides the myriad of risks today and arguable the most uncertain geo-political situation since World War II or the height of the Cold War, gold investors and buyers can look to Presidential history, as gold has recorded has average gains of 15% in inaugural years since 1974.

This may be due to the fact that the first year of many administrations is frequently a time of significant change and increased uncertainties and risks. Markets are concerned that the US presidential handover and advent of President Trump willÂ lead to volatility and turmoil in 2017 which will likely impact risk assets such as stocks.

The price of gold has already gained 5% this year and appears to be consolidating just above US$1,200 an ounce today. Investors can take a look at history for signal and indications as to how gold and stocks might perform this year.

A look at recent presidential transitions supports optimism among traders over the metal’s prospects. Gold has averaged gains of almost 15 percent in years marking the inauguration of a new president since the 1970s, advancing in five of those seven years.

In contrast, the S&P 500 index of equities declined in four of those years for an average loss over the period of 0.9 percent.

From Presidents Gerald Ford to Barack Obama, bullion has often served as a haven in times of political flux.

The metal has climbed about 5 percent this year as questions over the possible economic impact of Donald Trump’s policies add to investor angst over Brexit and mounting trade frictions. Bulls reason that gold will extend its gain as scant details of Trump’s fiscal stimulus program and tensions with trading partners including China unnerve investors.

Like Trump or loathe him, most would acknowledge that his recent press conference, ill judged tweets and recent transition to power has been a complete mess.

Today is âT dayâ or âTrump dayâ as the world awaits the inauguration and advent of Donald Trump as President of the United States. The eyes of the world are on Washington and traders and investors will be keeping an eye on the U.S. stock and bond markets, the dollar and gold.

Trump’s first speech as President, expected some time after his swearing in at 1700 GMT, may see President Trump offer more detail on his fiscal and economic policies, especially infrastructure spending and taxation, in addition to trade policy.

When Barack Obama was sworn in eight years ago, the dollarÂ strengthened by more than 4% in a day. This reassured markets and lulled many investors into a false sense of security regarding the dollar and markets. In the subsequent month after Obama’s inauguration, gold was 16% higher and in the course of the following 12 months, gold rose by 30% and gold was 23.4% higher in the calendar year 2009.

Markets and the dollar are unlikely to welcome Trump’s inaugurationÂ with such enthusiasm today. However, there is that possibility butÂ investors should fade the short term noise and focus on the fact that gold is likely to perform well in 2017 and in the coming years for some of the reasons outlined below.

Trump’s conflict with the CIA

Trump’s continuingÂ spat with America’s top intelligence agencies including accusing them of Nazi like tactics shows the level of geo-political uncertainty and risk facing the U.S. and the world.

At his first news conference last week, he said

âI think it was disgraceful, disgraceful that the intelligence agencies allowed any information that turned out to be so false and fake out. I think it’s a disgrace, and I say that â¦ that’s something that Nazi Germany would have done and did do,â Trump told a news conference in New York.

Trump has been smeared by senior elements in the CIA in another âdodgy dossierâ akin to that of the âweapons of mass destructionâ dossier which helped get the U.S. and the UK into the disastrous Iraq war. The tactics used in smearing Trump as a âsexual deviantâ are akin to those used byÂ FBI Director J. EdgarÂ Hoover against politicians and others including Martin Luther King in the 1960s.

Martin Luther King was an outsider, a political activist, a civil rights activist and a man of peace who fought peacefully for the rights of the poor and the disenfranchised , especially the African-American community.

Trump is a maverick business man and today is set to become an insider and one of the most powerful men in the world. A civil war between a U.S. President and senior elements in the intelligence agencies will likely lead to political instability on a massive scale and is a recipe for disaster.

We do not like to have toÂ consider the ‘assassination’ scenario but the precedent of JFK’s assassination looms large. Trump is hated by large sections of the American population and indeed by very powerful operators in the politics and intelligence circles in Washington D.C. and in the U.S. There are alas likely lots of willing patsies.

‘Strong dollar policy’ to end as U.S.Â has $100 trillion plus debt

The dollar was on the back foot again yesterday despite some strong data, most notably some strong numbers in the Philadelphia Fed Manufacturing Index and a very low initial jobless claims number.

New Treasury Secretary Steve Mnuchin sparred with Democratic lawmakers on various topics, and actually expressed support for a strong US dollar, placing him at odds with President Trump and attempting to clarify comments by the president-elect that hit the currency earlier this week.

On Monday Trump appeared to break from decades of the strong dollar policy in the US by saying that the greenback’s strength is âkilling usâ and was preventing American companies from competingÂ internationally and with China.

Trump and Mnuchin’s comments highlight the uncertainties and many conflicting signals over Trump’s financial and economic policies.

Will Trump’s speech today reignite the US dollar strength seen in late 2016 or will his speech lead to a sell off in the dollar and a surge in the gold price? We are living in a ‘Brave New Trump World’ and asÂ Aldous Huxley said âYou pays your money and you takes your choice.â

Now more than ever, the short term is nigh impossible to predict.

We believe that Trump will attempt to end the ‘strong dollar policy’ or at the very least will try and push the dollar lower in the short term in order to boost American exports and jobs in a desperate attempt to kick start the moribund U.S. economy.

There is also the somewhat important matter of the U.S.’ near bankruptcy with its $20 trillion nominal debt and over $100 trillion in unfunded liabilities (more on this below). The market will dictate the value of the dollar in the long term not the pronouncements of Trump or his Treasury Secretary.

Investors should fade the short term noise and focus on the diversification benefits that owning physical gold will provide in the coming monthsÂ and years.

Contrary to superficial figures and analysis, Obama has left Trump an enfeebled and massively indebted U.S. economy with some 95 million out of work. This accounts for Trump’s popularity among large sections of the working and middle classes.

President Obama is set to leave a massive near $20 trillion debt crisis for his successor.

The U.S. national debt reached $19.96 trillion last week and increased by roughly $1 trillion a year during Obama’s Presidency and during the so called fake news ârecovery.â Obama and his government, like Bush before them, spent money like drunken sailors and pushed the U.S. closer to the brink of bankruptcy.

There is also the not insignificant matter of the between $100 trillion and $150 trillion in unfunded liabilities â for medicare, medicaid and social security as the baby boomers retire.

The U.S., like the EU and most western nations, is âkicking the can down the road.â Consequently, a U.S. and global debt crisis looks likely during the first term of President Trump.

Donald Trump holds three gold bullion bars after accepting it as a security deposit for a 10 year lease for on the 50th floor of 40 Wall Street in New York City, a Trump owned property, during a news conference in New York, September 15, 2011. REUTERS/Mike Segar

This profligacy will be paid back by the people of the U.S., and most likely by people in all indebted western nations, in the form of higher taxes, higher interest rates, inflation, currency wars involving devaluations and almost certainly a currency crisis involving the dollar and other leading fiat currencies.

Owning gold coins and bars in your possession and owning bullion in allocated and most importantly in segregated accounts will continue to protect and grow wealth in the coming years.

Bullion Bulls Have History on Their Side as Trump Takes Helm (Bloomberg.com)

Donald and the Dollar â No Country Can be Made Great by Devaluation (Acting-Man.com)

Pension Funds May Need Gold before It’s Too Late (ValueWalk.com)